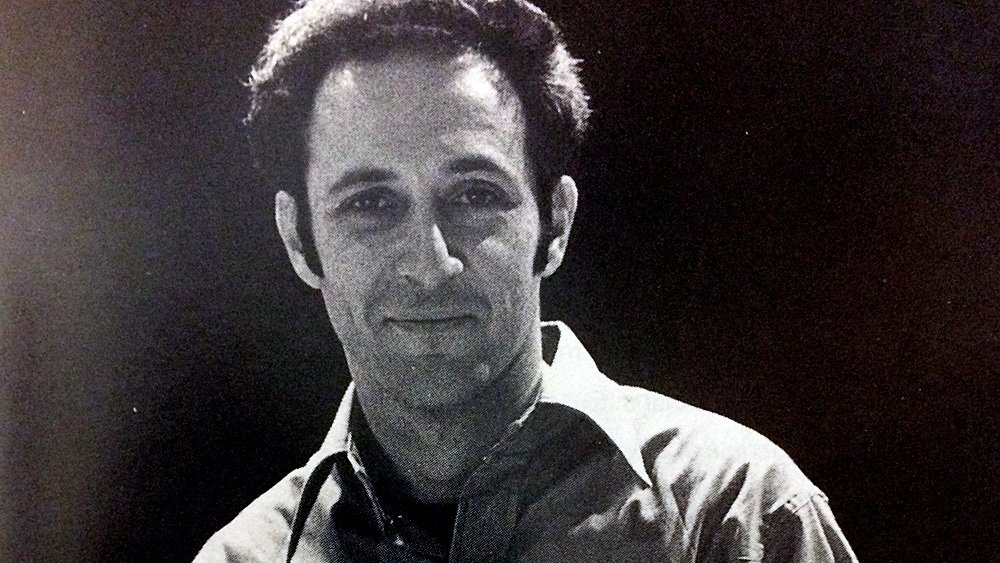 Science and art are rarely bedfellows. The pursuit of logic and fact often clashes with the hunt for aesthetic and emotional impact. Some have the gift to use the scientific approach to instead birth intriguing, creative works. One such aurally-focused human is Steve Reich.

Reich started in film soundtracks, making three soundtracks using the device that his early work because anchored around - seemingly innocent tape loops. Reich began experiments with making discrete collages of sound using field and radio recordings. The first of these pieces to capture the imagination was 'It's Gonna Rain'.

Reich took a segment from a sermon in which a preacher is proclaiming the rain of the Lord, cut it onto several tape decks and slowly brought the running tape reels in and out of step with each other. The resulting collage of sound steadily develops a prophetic tropical storm as rhythm splutters in, gains momentum and fades into another wave.

This was followed by 'Come Out' which works in much the same way. Again, a phrase - describing police brutality against black men over 50 years removed from the renewed movements of 2020 - proliferates and lays on top of itself to create a sequence of phased beats and drivers.

These are the first examples of what came to be known as Process Music, a term closely associated with Reich. This Process Music, the idea of taking a logical process and applying it to sounds, such as two examples of the same recording going out of phase to create new melodies, is where the rigour of science and the vision of art collide in truly fascinating ways.

He used the tapes one more time for the phasing effect in Melodica before graduating to manipulating the instruments himself. Now, two performers play the same melody and deliberately fall out of sync. As one player raises their tempo, new wrinkles open. The accelerations are not felt as tempo but as texture. Microbursts of energy fill the space until they lock back into step. Several Phase pieces were penned with this technique; for Reed, Violin, and most famously, Piano.

In a rare twist from the looping nature of everything before it, Reich created Four Organs. The twist is that unlike everything Reich created beforehand, this piece has a point A and a point B that never returns to its origin. Instead, it dilates. A simple chord is wrangled apart repeatedly, beginning at an entirely sensible eighth-note speed and ending at a wholly ludicrous 200 beat note speed. The effect is mesmerising should you allow it to grasp you. The tension and the release of one chord in the later passages will take substantial time, generating a painful wait for the organs to reach home and blissful conclusions when back in the familiar comfy chair of the chord resolution. That is of course assuming the piece works for you. Famously in a New York concert hall in 1973 it aggressively didn't work for an audience that rioted against it. Four Organs leans more towards a scientific experiment, and the evidence ended up being inconclusive. 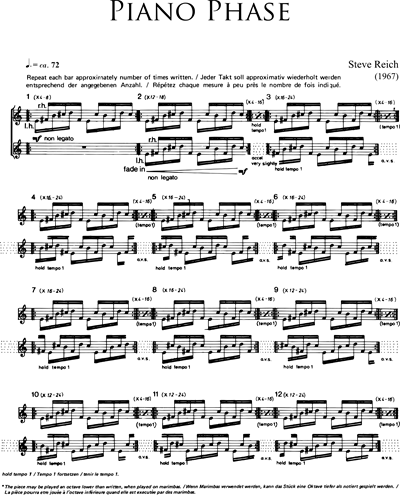 The phasers were set to loop for a finale, known simply as Drumming. Tribalism and minimalism collided to create driving, forceful rhythmic textures over 90 minutes.

Almost 10 years on, Reich apparently decided that this one trick pony-ism of phased melodies could not last him a whole career and he collected together an ensemble with which to expand his horizons. The next toy he played with was augmentation, which he'd already explored in Four Organs. This birthed Music for Mallet Instruments, Voices and Organ. Percussion provides mostly grounding for the listener so that the musical horizon remains in view. The vocalists and organists, however, expand and contract like cracks in ice formations.

Now it's about here where I confess I start to lose Reich, as he moves on to more quote endquote traditional work. This is on me, not him. His early years were his most rigid, most fixed; and for me, most appealing. But that is not to say the mine is empty. I will return soon to excavate further.